Berry Delicious Keto Shortcake for One

Spring in the San Francisco Bay area is just starting to peek around the corner (our seasons are a little weird), and I have been craving light, airy desserts lately. The recipe I’m sharing today is the result of a happy accident.

I was trying to make these Cream-Filled Vanilla Cupcakes from The Ultimate Guide to Keto Baking by Carolyn Ketchum (p84): 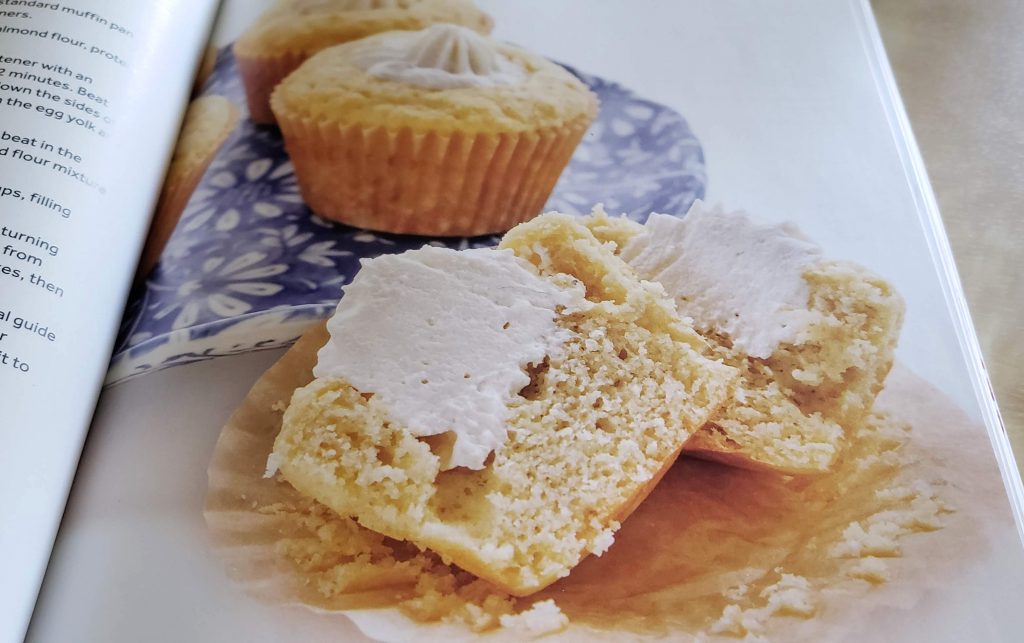 And I did make them. I skipped the filling because a) my partner dislikes icing (so I figured he’d just scoop that out anyway) and b) I wanted to nail the cupcake bake first (my oven is temperamental and I constantly struggle against under-baked middles with over-baked crusts). But without the filling, the cupcakes are just eh. Not enough flavor to stand on their own and more crumbly than I prefer.

So I made the filling anyway but was too lazy to cut out the cupcake middles. I also found I could really only eat half a cupcake before getting bored. It needed more texture! More dimension! In a fit of inspiration from my teenage years working at TCBY, I decided to try the cupcakes in a parfait, or trifle if you’re British.

And the resulting light, refreshing goodness was exactly what I needed. Here’s how to make it.

Disclaimer: I’m not including the actual recipes from the cookbook—because I followed them exactly, and the author deserves the income from people buying her book—but you can substitute any vanilla cupcake and whipped cream recipes and get a similar result. Just be sure to calculate your own macros for the Nutritional Info.

To follow my recipe exactly, you’ll need half a cupcake and some frosting (make one batch of each and take what you need from it) of the following from The Ultimate Guide to Keto Baking. Or use a version of your own (it doesn’t even have to be keto-friendly!):

I’m pretty happy with how my version turned out, and since specific ingredients (especially sweeteners) can make such a big difference in keto baking, here’s exactly what I used for the recipes above:

Since this is a single-serving berry shortcake, you’ll have a lot of leftover cupcakes and cream from your pre-bake, so just store them until you’re ready for your next snack. I keep the cupcakes at room temperature in a plastic-covered bowl and the cream in the fridge in an airtight container. Ready? Let’s make delicious berry shortcake!

Before constructing your goodie, you’ll need access to (make or buy):

If you want to be fancy, transfer the frosting into a piping bag with a small decorative tip. You can store it in the fridge in a ziplock gallon bag between uses.

Alternately, you can just use simple whipped heavy cream from a whipping siphon. I prefer the texture and lightness of the gelatin-enhanced cream from the cookbook, but the siphon cream is simpler and quicker to make. To make this version of the frosting, add one cup of heavy whipping cream to your siphon (I have this one) and a brief squeeze of the stevia drops linked above, then charge with one N2O cartridge. You’ll need to refrigerate the filled siphon for about 30 minutes before dispensing.

Note: While I call this a “snack,” at 300+ calories and with such high fat content it’s really more of a meal for me. Depending on your daily calorie requirements, you might enjoy this as a light lunch on its own!

Cut the cupcake in half, then slice into small cubes. You should end up with a pile of crumbly mini-bites. Store the unused cupcake half.

Cut the blueberries and raspberries into quarters.

Core the strawberry, then cut it into thin slices length-wise and width-wise until you have long logs or little cubes, whichever you prefer. 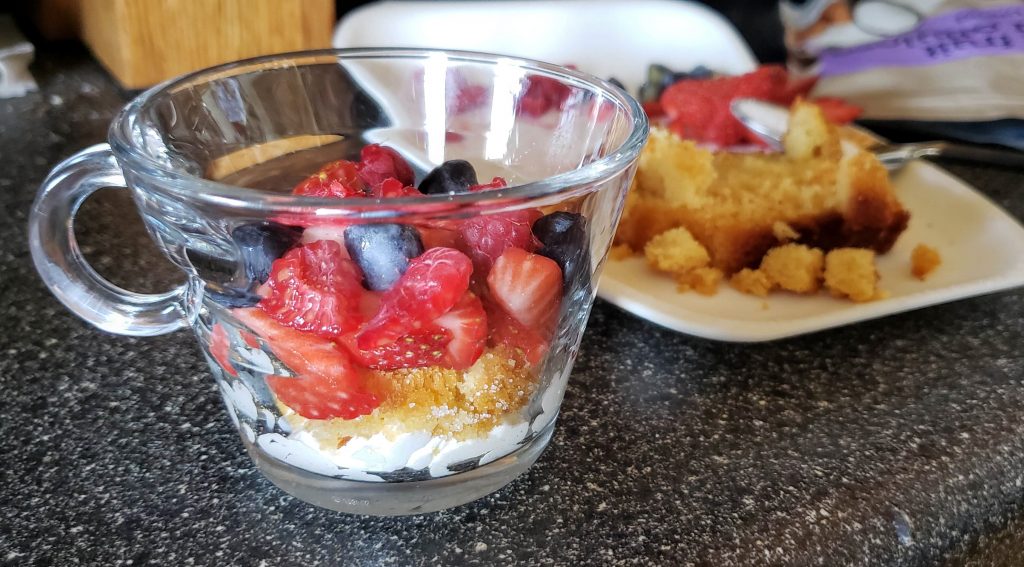 Loosely cover the bottom of the glass or bowl with cream. Not too much, just enough to give the cupcake cubes something to sit on. I usually pipe in about a 1/3″ deep layer of cream.

Cover the cream with a thin layer of cupcake, about 1/3 of your total cubed stockpile.

Top the cupcake layer with 1/3 of your sliced fruit, distributing the types of fruit evenly over the cream.

Sparingly sprinkle a thin layer of granulated sweetener over the cupcake layer. This is optional, but I like the crunch and extra bit of sweetness it adds.

Repeat from the cream step, until you have distinct repeating layers of cream, cupcake, and fruit.

By this point, my glass is usually domed over with yumminess, so I like to just sprinkle any remaining cupcake crumbs and a bit more sweetener on top. 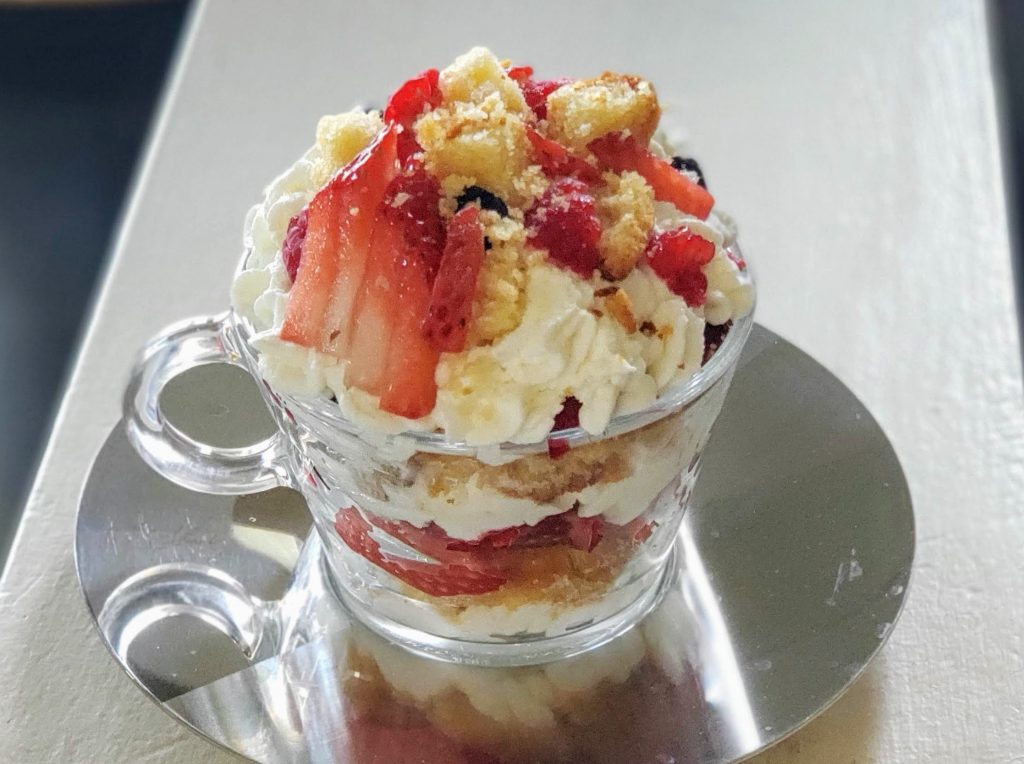 Your macros will vary based on the cupcake and frosting recipe you use, as well as the exact amounts you used of each as you constructed the layers, but here’s what mine generally comes out to be:

If you use MyFitnessPal, search under “Meals” for “Berry Shortcake (Keto)” to easily add this item (assuming you used the cookbook version of the cupcake and frosting).