Quick disclaimer: Young Adult books are usually not my thing, but LGBTQ issues have a special place in my heart. So I can’t really speak to how this story fits into the larger YA genre, but I did enjoy the hell out of it.

If this jaded, adult-romance-loving editor can fall in love with Kevin van Whye’s debut story, you probably can too. Read on to find out why it’s worth your time.

I adored the hook for this book. As part of a dare, Bryson Keller has to date the first person to ask him out every Monday morning or *gasp* he’ll have to take the bus to school for the rest of his senior year. Add to that everyone’s assumption that only girls will ask him out, plus the fact that the narrator is a closeted young gay man, and you know you’re in for a ride.

Kai is a balanced, likable high school senior. He’s shy enough to be relatable, just sarcastic enough to entertain, and worries about the things many modern teenagers do: getting decent grades, being late for class, fitting in socially, acceptance to a good college. Coming out.

I’m a senior in my final year of high school. For these four grueling years, I’ve managed to keep it a secret that I am gay, and just like that, I’ve kicked the closet door open.

As I listen to him laugh, I realize that I don’t want him to think this is a joke.

My being gay isn’t a laughing matter.

The heart of this story is Kai’s struggle to accept and truly embrace who he is—even beyond his sexuality, but starting there. It’s a coming-of-age, coming-out story for today’s youth. The cast reflects a healthy diversity, and the story approaches the challenges of being different with honest sensitivity.

I wait for all this while reminding myself that being gay is never a choice. If it were, why would so many of us choose to be shunned and spoken about behind our backs? The answer is simple: it isn’t a choice.
It’s all so unfair: because you’re so-called different, you need to stand up and say that you’re so-called different. What makes everyone else normal? Who gets to decide that?
Whoever it is can suck it.

Kai touches on something that I’ve never really understood. Why do people choose to believe that others intentionally choose a life of discrimination and hardship? It’s the kind of damaging social programming I saw every day growing up in the American South—although I hadn’t yet learned to recognize it—but the blind discrimination and hubris still baffles. Every time. Why is the sanctimony of one own’s belief system more important than another’s reality of self?

Which leads me to another interesting fact about Kai. He’s essentially agnostic, and as someone who never really accepted the sovereignty of a god (in my recent nor younger years), I relate to that. There are decades separating my age from Kai’s, and very few aspects of our lives are similar, yet I feel a sort of kinship with him. Mr. van Whye has penned this character so honestly, and with an appealing sort of innocence, that it’s difficult not to relate to Kai.

Gay or straight, everyone has heard the horrors that some kids endure when they come out. It isn’t just warmth and acceptance for everyone. Sometimes it’s a real goddamn nightmare. It’s why the closet exists. And why it will keep existing.

Even as the story explores the hard-hitting reality of non-het people having to either announce being different or hide it, Date Me Bryson Keller! is delightfully charming and sweet. Bryson himself is almost too good to be real, with his even temper and his easy understanding. And the baby steps of the attraction and romance between Kai and Bryson reminded me how sweet love can be, how uncomplicated when we stop letting all the other stuff get in the way.

The story tackles other relevant issues too, like Kai’s struggle against people’s bigotry and insensitivity about his mixed-race heritage.

“You wouldn’t believe how many people actually question whether or not I am mixed race. It’s like they have this idea of how I’m supposed to look, and I clearly don’t, so to them I’m less authentic.”

Date Me, Bryson Keller! is a lovingly crafted story that rings with the sincerity of someone’s real truth.

I’m long removed from the angst and drama of high school social dynamics, but knowing that what happens to Kai is still a reality in our so-called modern society saddens and infuriates me. As humans we deserve better, for ourselves and for one another.

While I won’t give away the big events of the story, know that yes, this story is a romance and it has a happy ending, but it’s also a little heartbreaking. Even without reading the Acknowledgements at the end, the author’s #ownvoices sincerity shines through. What a lovely debut book from author Kevin van Whye.

Even if YA isn’t usually your thing, give Date Me, Bryson Keller! a go. It’s refreshingly honest, and it’ll melt your heart.

See my review at: Goodreads 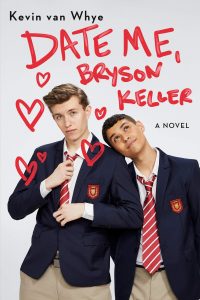 What If It’s Us meets To All the Boys I’ve Loved Before in this upbeat and heartfelt boy-meets-boy romance that feels like a modern twist on a ’90s rom-com!

Everyone knows about the dare: Each week, Bryson Keller must date someone new–the first person to ask him out on Monday morning. Few think Bryson can do it. He may be the king of Fairvale Academy, but he’s never really dated before.
Until a boy asks him out, and everything changes.
Kai Sheridan didn’t expect Bryson to say yes. So when Bryson agrees to secretly go out with him, Kai is thrown for a loop. But as the days go by, he discovers there’s more to Bryson beneath the surface, and dating him begins to feel less like an act and more like the real thing. Kai knows how the story of a gay boy liking someone straight ends. With his heart on the line, he’s awkwardly trying to navigate senior year at school, at home, and in the closet, all while grappling with the fact that this “relationship” will last only five days. After all, Bryson Keller is popular, good-looking, and straight . . . right?
Kevin van Whye delivers an uplifting and poignant coming-out love story that will have readers rooting for these two teens to share their hearts with the world–and with each other.

Script your own HEA: Dig deeper into your personal GMCs