Home » Deal with the Devil by Kit Rocha
Reviews

Book review: Deal with the Devil by Kit Rocha

Quick disclaimer before I get started: I was a fan of Kit Rocha’s Beyond and Gideon’s Riders series and reviewed them faithfully back in my GraveTells days, so I was excited to check out the start of this new series set in the same story universe. I was especially curious to see how working with a traditional publisher might have changed the authors’ voice and pleasantly surprised to find that it hadn’t. Not at all. The Kit Rocha we see in the prose and dialogue of Deal with the Devil is the same edgy, progressive, sometimes poignant storytelling style we all came to love through the O’Kanes. Now on to the good stuff.

You don’t need to have read the previous series in this story universe to enjoy Deal with the Devil.

Book review: Deal with the Devil by Kit Rocha

I adore Nina, Knox, and this whole series setup. Right off, one of the biggest differences between Deal With the Devil and Kit Rocha’s previous two series (Beyond and Gideon’s Riders) is the much smaller cast. I found it easy to slide right into the story universe without feeling overwhelmed. And while I am personally a fan of both previous series set in this story universe, you don’t need to have read them to jump into this one. Fans of the O’Kanes will love the extra tidbits of world info (details the Beyond and Gideon’s Riders stories had no access to because of their geographic seclusion) and new readers will experience just enough dystopian goodness to get hooked.

Instinct straightened his spine, but he couldn’t rely on looming over her for physical intimidation. She was tall, she was pissed, and he still wasn’t sure which of them would win in a fight.
It was perversely exhilarating.

This author duo is known for writing strong female characters, and Deal With the Devil wastes no time showing off just how badass Nina is. Knox is no slouch either.

Maybe Nina was something even more dangerous than a predator.
Maybe she was a leader.

I love that the strongest character in this book, and the person emerging as the clear leader, is a woman. That’s a first for this story universe (the previous sect leaders were Dallas and Gideon) and it’s damn nice to see.

“Do you guys do a lot of that? Record new things?”

“We wouldn’t be proper archivists if we spent all our time digging up the past. People didn’t stop creating after the Flares.”

When I first heard about this series, I thought “okay, exactly what is a mercenary librarian?” This moment in the story really hits home just how important librarians (and libraries) are.

Something else different about this story is how much focus is given to storytelling perspectives outside the central romance. Deal With the Devil is a post-apocalyptic brand of urban fantasy (using science rather than magic and paranormal elements), so I expected the story arc to have as much weight as the romance (if not more)—and it does—but I really enjoyed getting to know each secondary character in their own voice.

“They broke me and rebuilt me and sent me out to be a good little soldier again.” He exhaled on a shudder and held her gaze. “That’s why I’m an asshole. That’s why you can’t trust me. They ripped all the good out of me, Nina.”

There are some beautiful character and relationship moments in this book, little gems that have me looking forward to future stories and how this diverse cast will evolve over time as they become more their own people and shed the programming that shaped them.

“It’s not my life I’m trying to pin a price tag to these days, Knox.” Gray saluted him. “It’s my conscience.” The salute had an air of finality. It was Gray, truly saying farewell to his captain.

And for all you O’kane fans, there’s at least one delightful little easter egg that I won’t spoil. 🙂

Deal with the Devil is a win. It’s thought provoking and imaginative and carries a theme of hope amidst true darkness. The sex is still as spicy as Kit Rocha fans have come to expect, but the focus is more on the story and characters. Deal with the Devil is a must-read first step into the scientifically advanced post-Flares universe only hinted at in previous series.

Deal with the Devil is a win.

New readers who are fans of traditional urban fantasy with a sci-fi bend will enjoy the character- and plot-based themes, and existing Kit Rocha fans will get just about everything else they’ve come to expect from this dynamic author duo. 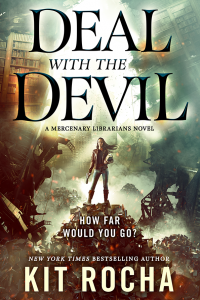 Deal with the Devil is Orphan Black meets the post-apocalyptic Avengers by USA Today and New York Times bestselling author duo Kit Rocha.
Nina is an information broker with a mission--she and her team of mercenary librarians use their knowledge to save the hopeless in a crumbling America.
Knox is the bitter, battle-weary captain of the Silver Devils. His squad of supersoldiers went AWOL to avoid slaughtering innocents, and now he's fighting to survive.
They're on a deadly collision course, and the passion that flares between them only makes it more dangerous. They could burn down the world, destroying each other in the process...
Or they could do the impossible: team up.
This is the first book in a near-future science fiction series with elements of romance.


*This post contains affiliate links you can use to purchase the book. If you buy the book using that link, I will receive a small commission from the sale.

Script your own HEA: Dig deeper into your personal GMCs